You are here: Home / Kung Fu Training / Why Doesn’t My Wrist Lock Work? 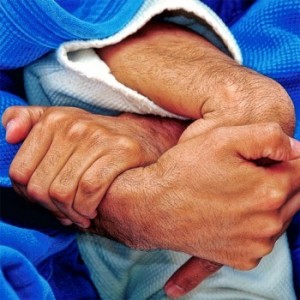 The first time I seen a wrist lock applied on a person I was in awe at how a simple move could cause so much pain to a person. When I first learned how to do wrist lock I couldn’t actually get the technique down.

The first wrist lock I learned was a reverse wrist lock. I remember the look on my partner’s face as I struggled to apply the lock.  My sifu came over grabbed the guys arm and in a half a second if not shorter the lock was applied and he was kneeling in pain.

Specifically: Use what works and discard what doesn’t

I believe that is one of the most misunderstood Bruce Lee’s statements, but since the man is dead now, we will never truly know what he meant by that statement. Because of this particular statement, probably millions of people stopped trying to get techniques to work.  Not because they don’t work, rather because the time it takes to properly learn how to execute the technique takes to long. Most people don’t really have the patience to learn real martial skill.

I believe what Bruce Lee was talking about was all the cookie cutter martial art schools that started popping up. Realizing that many of those schools where watered down versions of the real thing.

Another words unless someone learns from someone who actually knows how to do a wrist lock they may never learn the right way.  The first martial art class I took was Karate.

My first instructor told me that if I can’t get the wrist lock to strike them and try the lock again. Basically cause a disruption and then go for the lock. If the lock fails move on to another move.

I do agree if you can’t pull off the technique you are trying within a second or so, you should move on to something else. In a fight there isn’t time to waste trying to apply technique.

While my first teacher may have been able to do an effective wrist lock, I wasn’t able to figure out how to do it. When I started training in Kung Fu with my current sifu he effortlessly applied a wrist lock on every person I have ever seen him apply it to. It didn’t matter if they resisted or not.

This had me curious and this kept me practicing the technique throughout the years. Though I admit it took me many years of training before I realized how to do the lock.

It takes a good instructor who knows how to explain things in a way that YOU understand. Everyone is different so everyone needs a different answer. We all see things differently.

It’s the instructors job to relate to you. So if your not getting your wrist lock it might just be the person teaching it to you isn’t explaining it in a way YOU understand. I’ve discovered in my own journey that for the most part we all do the same stuff. The only real difference is the way things are explained. A simple change in perception can make all the difference.

Kung fu Training isn’t about the end goal it’s about the journey, until next time…