You are here: Home / Lighter Side Of Kung Fu / Kung Fu – Be Careful What You Volunteer For
Please follow and like us: 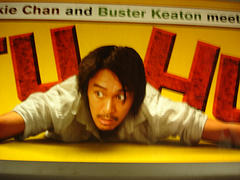 These where some pretty funny clips I found on people doing Martial Arts Demonstrations gone bad. Kung Fu has inspired thousands of people to try some pretty silly stuff is that good or bad?

When movie studios in Hong Kong found a goldmine in making and distributing Kung Fu movies to western audiences, they had to replace the entire sound track.