The big question is who’s center line are you fighting in yours or your opponents.  Some would say that you should always fight within your own center regardless of the situation. The problem is sometimes the fight is not in your center , in a fight an attack can come from any angle at anytime. 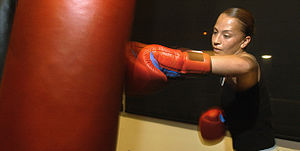 The reality is this, there really is only one way of fighting, that is with our hands and feet.. Okay you can add elbows,biting and kneeing into the mix. But the truth is there really aren’t styles per say. There is just interpretations of how someone should handle themselves.

What does this have to do with Wing Chun’s Center Line theory? Just this, it doesn’t really matter because every single situation is different. Just like no 2 finger prints are the same, neither are 2 fights. If there is one thing I have learned from Wing Chun it is that we must flow with the energy given, this means sometimes abandoning the center line in favor of dealing with the energy where it is at.

nice explanation, i’m new to wing chun and the center line theory fascinates me. i love the way wing chun uses the hands to get to the center line whether it be bong sao taun sao etc. i think for a beginner the legs & hip flexors need …

The Centerline Theory of Wing Chun The shortest distance between two points is a straight line. If you are face to face with an opponent, the shortest.

The Wedge Theory – Use the 4 dimensions like a snow plow! Magnetic Zone Theory – When and where to strike, and with what! Center Line Theory – Beat him to the next punch with positioning! Continuous Forward Spring Pressure – Persistence …

Wing chun and MMA share one thing in common.  They both where created to hurt another human being. In the end its not the style that tells the story, it is the heart of the person that does.