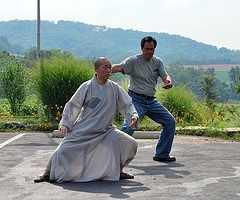 Our body bends and moves through the joints.  There are basically 6 body points that one uses to combine the force in our body; ANKLES for the feet, KNEES for the legs, WAIST for the torso, SHOULDERS for the upper body, ELBOWS for the arms, and WRIST for the hands.  Among these six, there lie two points that hold priority from among the others; the wrist and the waist, in what we call the WRAIST.  It is these two points in which energy can be optimized with the least amount of effort required to achieve maximum energy in the least amount of time.

Force can only be sent to either of two places in the arms; shoulder or wrist.  When the applying the force on the shoulder, it will ultimately create a holding or resistant force, however, it is the ability of the wrist that can redirect incoming force with minimal effort.  This wrist control gives us the ability to steer force off the body so as not to be under direct pressure which can cause the body to resist the attack making the strength become the deciding factor.  By utilizing the wrist, the practitioner gains two benefits; the ability to thwart off the attack at the same time return the force of the assailant to him/her coupled that with the practitioners.

This utilization of the wrist allows the practitioner to handle force not only from long range, but also close range.  When arms are in close range, it loses power to hold an incoming force.  Only through the turning of the wrist can force be redirected off at the same time directed back to the opponent.  Like the head of a snake that leads the direction for the body to move, the wrist too leads the forearms to move energy from the arms and shoulders.

Although the waist is not as necessary to use in long range, it becomes just as vital when combat draws itself from mid range to close quarters combat.  Our waist is not just the core of our power, but it is the center of our balance. At long range, using the waist is optional, but as the distance draws closer, it becomes more required for the waist to be used.  From the long range, the wrist is capable of directing the force due to the space it has from the body.  However, as the energy draws closer to the body, the lack of distance is gained from the turning of the waist.

Like in most physical activities, our motion and control stems basically from the waist and the wrist, i.e. golfing, dancing, tennis.  It is the waist that allows the legs to move quickly and fluidly for the lower half, while the wrist keeps the speed and flow for the upper body.   From the combination of both the wrist and the waist, one can control the most committed strike from the longest to the closest ranges.  When these two forces are combined effectively, one can unite the other forces from our body as a single unit to achieve maximum power, speed, and control with minimum effort.