You are here: Home / Martial arts / Are You Training Your Martial Arts Effectively?
Please follow and like us: 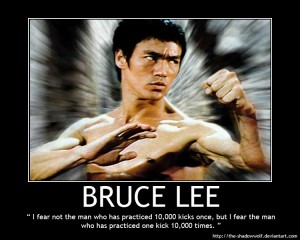 Really it doesn’t matter what style of martial arts you are studying. What matters is how you approach your training. In today’s martial arts world you hear lots of talk about sparring and training realistically.

How many times have you heard things like: A wing chun guy is doomed if he/she is taken to the ground. Or that school doesn’t train with real pressure, they will never hold up in street fight.

Your skill as martial artist happens because of what you do on your own. Meaning when nobody else is around to watch you. The time you take to solo train every week is the most important factor if  increasing your skill matters to you.

The reason simply is because victory goes to the person that has trained better. Notice I didn’t say harder, that’s because to some people that means you have to get punched in the face more or do more push ups than your competitor.

This isn’t true, you simply have to consistently train by yourself, along with training with others. You need to develop the ability to push yourself without needing someone to push you.

Winners aren’t born, they are created. A winner is  winner because the person wanted it bad enough,..

Lot’s of people would love to be like Jet Li or Bruce Lee or be a bad ass like Chuck Norris. The problem though is many of those same people aren’t willing to do what it takes. How many hours alone do you think Bruce Lee trained? Or Chuck Norris? Or any martial artist that has achieved a high level of skill and success in their preferred martial art?