You are here: Home / World Of Wing Chun / Learning How To Do The Wing Chun Jut Sao or Sau 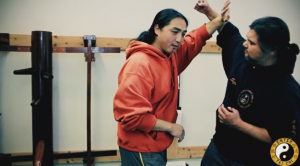 How many times have you wondered how the Wing Chun Jut Sao worked? I know i’ve seen some videos that mis – represent the function of a jut sao.

First off, I am a firm believer that you first have to have good structure and foundation before you start applying techniques.

However after you learn how to perform and practice a move like Jut Sao you need to experiment with how to deploy it in your game.

Personally I like using Jut Sao’s as weapon strikes while a person is attacking.

A few good jut’s to the persons forearm and they will think twice before swinging again. Another application of a jut sao I like is it’s ability to jerk someones arm.