You are here: Home / Archives for Wing Chun

Understanding the Bong sao can be very difficult at first. Especially considering it’s one of the first deflections you learn in Wing Chun…

Maybe this has happened to you? Have you ever tried using a Bong Sao and the deflection fails you or worse you start to feel a burning pain in shoulders? For some folks they end hearing a popping sound in their joint.  END_OF_DOCUMENT_TOKEN_TO_BE_REPLACED

The Biggest Hazard To Your Wing Chun Training

While pride and ego can be a good thing, more times than not it’s actually a very bad thing to carry around in your Wing Chun training.

In the Wing Chun community there are ten’s of thousands of people from all over the world who train in Wing Chun.

In today’s martial art climate you would think that would be unity among all the different Wing Chun families. END_OF_DOCUMENT_TOKEN_TO_BE_REPLACED 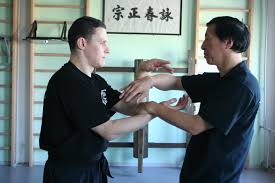 With my Sifu my Chi Sao training is very structured. However, in the street training with other Wing Chun practitioners it can sometimes be the closest thing to fighting that you can experience without fighting. END_OF_DOCUMENT_TOKEN_TO_BE_REPLACED