Wing chun Principle – Of course The Answer Is A Straight Line

While there are many students who train in this style, many who claim that their way is the only true way. I like to believe that the Wing Chun Principle is more important than the actual linage. It has been these divisions in the martial arts that has caused valuable information to get lost.

For example: Many people seek out who taught Bruce Lee figuring that if they train with that sifu they will be as good as Bruce Lee. This is kinda of funny because the man (Bruce Lee) trained night and day every day  from what it looks like if you read any of his books.

The only requirement that you should look for in a teacher is:

Those are really the only 2 questions you should be concerned with.  This is why understanding a wing chun principle is more important than knowing who said what when. Even the great late Ip Man learned from someone else I am also sure he taught the system from his own unique  perspective.  Since Wing Chun is based on sensitivity training (chi sao) it can be said that like a fingerprint each persons wing chun is slightly different than the next persons.

Wing Chun Principle – The Best Defense Is No Be There! 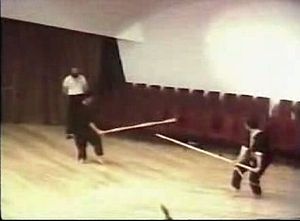 What I particularly like about the  Wing Chun  martial art system is that, used correctly it takes your opponent by surprise and if you have a decent level of sensitivity skill you can really confuse the heck out of them.  Wing chun is one of the few systems that use principles to extract its knowledge from. We really aren’t talking about just 1 wing chun principle there are many different principles that make up the system. Each one up to individual interpretation. This is what gives wing chun so much diversity in the way it is done and taught. Ego, Arrogance and Ignorance  is what divides the world of wing chun.

Wing Chun Principles – More from around the web

The main objective of Wing Chun is to be a realistic system of self-defense. Wing Chun does not focus on fighting “techniques”, instead relying on fighting and energy principles to be followed at all times. The central idea is that, …

Teaching you the rhythm of the form, not to be too robotic and it is a great tool for executing applied wing chun training principles. Apart from having an actual training partner the wing chun dummy is the next best thing and a must …

Wing Chun Spirit Blog: What is principle based Wing Chun?

The approach advocates that Wing Chun Kung Fu is a structure of combined physical techniques, mental strategies and methods for learning the Wing Chun system that are ruled by common, overarching principles. …