You are here: Home / Learn Kung Fu Online / Quick Self Defense Against Someone Trying To Push You 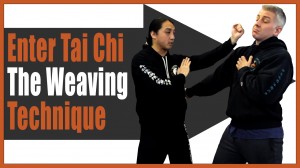 n this kung fu lesson we are going to talk about a technique called the Weave. Now the movements may look familiar but I believe my sifu named it the weave technique. At least I think he made up the name. I am not 100% sure though, I’d have to ask him.

This technique is called the weave because basically you are criss crossing your opponents arms when they go to push you. It’s actually a pretty simple technique to master.

The only downside if there is one is that you need someone to practice this with. This is actually one of those techniques that the situation to use it could be considered common.

How many times have you seen someone push someone else? I am sure you have. That’s what I mean by this technique is a good self defense technique to learn. Because of the fact that getting pushed is a common thing that happens that can lead up to a violent situation.  I am pretty sure that you can learn how to do this kung fu technique online. I am saying that because talking about learning kung fu lessons on the internet is somewhat of a taboo subject.

Don’t watch this video if you don’t believe you can learn anything from it. Learning kung fu online is only possible if you have an open mind to the idea of learning stuff on the internet.

I hope you enjoy the video!

If you enjoyed the video leave me a comment I would love to know what you thought of it….