You are here: Home / Archives for kungfu

The first Kung Fu style I learned was Wing Chun, it was explained to me that the system is an external/internal system of martial arts. To be honest with you I didn’t even know what that really meant.

The reason why I decided to study internal martial arts is because I realized one day I would grow old and weak. All of us are running uphill and sadly the hill just keeps getting steeper. The only thing we can do is learn how to use our bodies as efficiently as we can because as time goes on we all get weaker.

Master: Even when you think you are being soft, you are not. Student: But why? Master: Because you are already thinking too hard… ~Sifu Larry Rivera Can you relate? I know I can! #Kungfu #martialartist #wisdom #martialarts #quotes #spirit #mindset #mindovermatter #tao #besoft #dontoverthink #feel #chi #master #sifu #selfdefense

While time doesn’t stop we can slow things down. The best way in my opinion is through learning things like Tai Chi or any of the other internal martial art styles.

One of the most difficult part of combat is to learn how to read an attack when squaring off with an opponent.  It is the point in which all combat starts off at, the first strike to the second and so on.  Let’s face it, if we knew an opponent’s attack, we could easily create (with proper training) a counter attack to give us the edge to defeat our adversaries.  There are many different telegraphing points an opponent can show, but which ones should we look for? 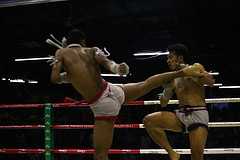 Now there are certain schools that would tell us that it is the shoulders that one should look for because it moves just before the arms do signifying an attack, while others might say that it is the eyes that give away the practitioners intentions because he will look to what he wants to hit, yet others will say to look at the elbows because the placement of that joint will tell us if it is a swing or a jab, while yet, some may even say to look at one’s stance because it shows his strong side versus his weak side.  There are many ways one learns to read when and how one strikes, but the one question remains is, “Who is right and who is wrong?”

The answer to that question is that they are all right and all wrong at the same time.  If one were to telegraph what you are looking for, then it would work.  But what if he shows another part different from what you are looking for?  That would then work against you.  There is always a sign in which one can see, but not every practitioner attacks the same way or in the same manner.  Every practitioner attacks differently therefore showing different signs.  Since there are many different ways one can telegraph attacks, what do we look for when we don’t know what the opponent will show?

The answer to this would be NOTHING.  What do we mean by that?  When one looks at a specific thing, then it is all he sees.  He creates a tunnel vision in which he loses site of other signs that could be seen but cannot because he is too busy looking for the one specific thing.  By looking at nothing, one can see everything.  By this we mean that one can pick up any movement occurred because he is not focused on a certain motion, but rather picking up anything that is initiated without thought allowing the practitioner to act without distraction.

When looking for a specific target, an opponent that knows what the practitioner is looking for can use that against the practitioner by feigning a strike.  The practitioner can also lose sight of his surroundings as he becomes focused on an opponent allowing others to attackers to sneak in strikes unaware.  When one looks at nothing, he not only picks up any movements better, he is also able to recover from any feigning attacks because he does not “jump the gun” to intercepting the strike but rather moves subconsciously as opposed to emotionally.

This technique is achieved by using our peripherals not only giving us the ability to see a wider range, but also allows us to see without looking thereby cutting off the thought process which delays action.  While we are taught as young children to always look at someone when talking to them, we have become accustomed to focusing through our “frontal view” and lost our peripherals.  We get into the habit of looking before acting while our peripheral allows us to act without looking or thinking.  Your eyes have a natural tendency to focus on movements.

The saying “the hands are quicker than the eyes” holds true.  Our eyes can become blurred when there are too quick or too many movements.  Strikers who create flurries of hits can cause us to lose sight when trying to look too hard.  With the peripherals, this doesn’t’ happen because your side view doesn’t have the ability to focus, but it does have the ability to sense motion which gives us the chance to respond to actions a lot faster because we do not need to ” look before we act.”

One technique I tell my student to develop a good habit is to look off to the sides to pick up things like your keys or a pencil, or anything of that sort.  Look at the object then turn away from it and use your peripherals to pick up that object.  In this manner, one will develop and widen your sight from both your sides.  By looking away with what you see, you develop what you don’t normally see with.

So remember, in order to see, try NOT TO SEE.

Thank you and God bless 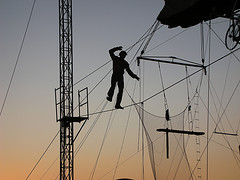 As Papa Bear’s force can be strong and powerful, one must be careful because when giving too much force, it can be absorbed against him by the soft force of Mama Bear causing the practitioner to over extend or lose his balance. Equally if the force is met too soft, it can be overtaken by the force of Papa Bear thus causing the practitioner to lose structure and thus collapse under the pressure.  So when one force becomes offset with the other, then that opposing force can be used against the unbalanced one.  While Papa Bear and Mama Bear represent the opposite extreme, it is the Baby Bear that was ‘Just right”.  So what does this mean?  It is through the Baby Bear that a practitioner can find the control between the two opposing forces.

The question is what does, “Just Right” mean and how does one achieve it?  The concept of the Baby Bear is to always be adjusting and counter adjusting with the force of both Papa Bear and Mama Bear given by the opponent.  It is maintaining the balance when there is an increase of pressure as the opponent decreases as well as decreasing pressure when the opponent increases it.  By doing so, the practitioner becomes “there, but not there.”  He becomes like the wind, where you can feel it, but there is no substance for the opponent to take.  This technique allows the practitioner to steer the force thus allowing him to control the energy to the practitioner’s will.

By understanding and applying the Baby Bear, size and strength does not become an issue while at the same time the practitioner does not expel or exert his own energy.  This method although does not require having physical strength, it does require having a high level of sensitivity that the practitioner must develop through consistent and continual practice.  While this principle takes a lot more training to become very skillful, it is not limited by ones physical strength.  One of the things I always like to teach my students to “Learn to develop the two “S’s” while avoiding the two “s’s,” which is to become soft and supple, not strong and stiff.

Remember, Feel the Force, not Force the Feel.  God Bless and God speed.

In the sacred space of the Universal Medicine Wheel, we move rhythmically to balance our chi, or life energy, so that it flows throughout our whole being. We affirm statements of choice about our lives and of love, light, and healing to …